Grupa Kapitałowa IMMOBILE S.A. publishes its results for 2018 and invites to a results webinar
Data publikacji: 17.04.2019

Grupa Kapitałowa IMMOBILE S.A. summed up the year 2018, which is another year in a row that recorded an increase in consolidated revenues. They reached PLN 347 million, increasing by 33% compared to the previous year. The growth is mainly due to the dynamic growth of revenues in the development and industrial construction segments.

In 2018, the consolidated revenues of Grupa Kapitałowa IMMOBILE amounted to PLN 347 million and increased by 33% compared to 2017. EBITDA in 2018 amounted to PLN 29.6 million and was 25% higher than in the previous year. The operating result was at the level of PLN 21.3 million as compared to PLN 14.6 million in 2018. The published results will be discussed by President Rafał Jerzy during Thursday's live webinar.

"All shareholders and observers of the company are invited to participate in an online discussion of the results. The Webinar will take place on April 18th at 12:30 p.m. Details and a link to the event are available on our website and blog" - encourages the President.

The Group's good result was influenced mainly by dynamic growth in two business segments - real estate development and industrial construction, which increased four and four and a half times respectively. A significant increase in revenues in the construction segment results from dynamic development of PROJPRZEM Budownictwo Sp. z o.o., a company established in 2017.

The increase in the real estate development segment results from commissioning and sale of apartments from the first stage of the Platanowy Park estate in Bydgoszcz. In 2018, the construction of the next stage of this investment began and the second stage of the Fordon housing estate in Bydgoszcz was commenced, which will contribute to maintaining the dynamics of the segment in subsequent periods.

The 21% increase in revenues in the hotel industry results from organic growth through the incorporation of new hotels into the chain. In 2018, these were facilities in Sopot and Poznań. In the following year, they will contribute to further increases resulting from the closing of the first full year of their operation, and the result will be accompanied by revenues from a new facility to be opened in May in Lublin.

This segment’s results in subsequent periods will be affected by the effects of the ongoing acquisition of Atrem S.A. Grupa Kapitałowa IMMOBILE has called a tender for the sale of 66% of shares in this company. The Management Board expects a repeat of the success of the acquisition of PROJPRZEM MAKRUM, which has been steadily improving its results since it joined Grupa Kapitałowa IMMOBILE, and its shares have increased by more than 100% since the acquisition. However, the Company has an appetite for more:

"We are convinced that this is not the last takeover this year. A number of acquisition activities conducted by Grupa Kapitałowa IMMOBILE S.A. and other Group companies will lead to further profitable acquisitions" - declares the Management Board.

The Management Board's letter to the Shareholders 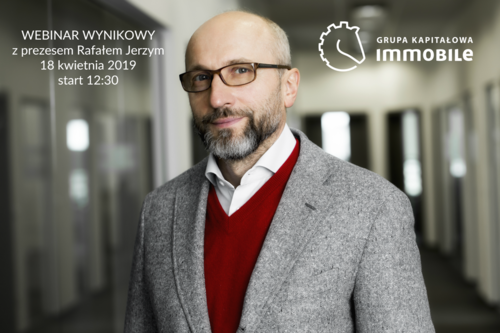 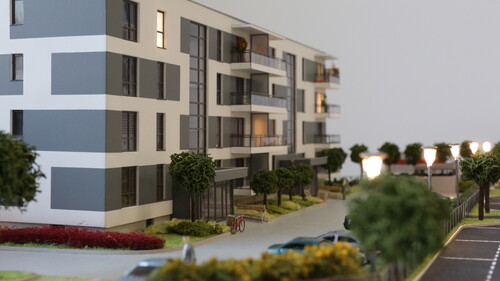 Mock-up of the model building of Osiedle Uniwersyteckie