The second stage of finishing works is underway in Platanowy Park and the apartments are scheduled to be put into use in the fourth quarter of 2020. At the same time, the construction of the third stage of the investment has been underway for several months. We present photographic documentation of the works by Krystian Dobosz from the blog Bydgoszcz w budowie.

Stage II consists of two multi-family buildings with a total of 195 flats and 5 commercial premises, and there is an underground garage under the buildings. The work should be completed in a few months. The external facade of the buildings is nearing completion and the sand and soil have already been supplied to the garage slab.

In the spring, the works related to the third stage of the investment started and now construction teams are concreting the foundations and walls. The construction of 256 apartments with an area of ​​25.3 to 126.1 m2 is planned as part of the third stage. The tallest of the three planned buildings will be approximately 57 meters high. The works are scheduled to be completed in the first quarter of 2023.

The multifunctional Platanowy Park complex is the largest development investment in Bydgoszcz. Over a dozen residential, office and service buildings will be built on approximately 10 hectares. Works started in 2014 with the construction of two multi-family buildings. So far, six buildings with 487 apartments and 30 commercial premises have been built. The contractors are building underground garages under the buildings in order to minimize the traffic of cars inside the estate.

We traditionally thank Krystian Dobosz, author of the Bydgoszcz w budowie blog for photos from the investment, where you can find more photos and additional information about the investment.

The current situation in the Immobile K3 office building 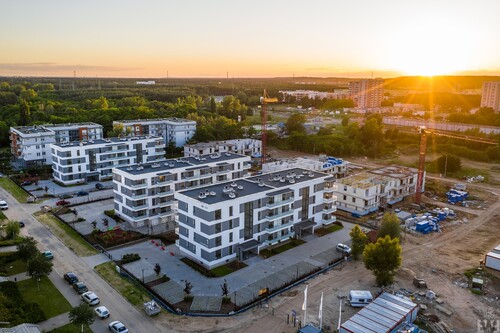