The record of an investor's chat with GK IMMOBILE'S Board - News - Grupa Kapitałowa Immobile S.A.

The record of an investor's chat with GK IMMOBILE'S Board
Data publikacji: 20.06.2018

At the beginning of June, the Management Board - Rafał Jerzy, Vice President Sławomir Winiecki and Member of the Management Board Piotr Fortuna - took part in investor's chat, answering questions about Grupa Kapitałowa IMMOBILE.The chat was organized by Strefa Inwestorów (the Investors' Zone) and turned out to be one of the most active meetings of this type in recent times, gathering around 700 investors!In just over an hour, the Management Board answered nearly 40 questions.

Mister President, at what stage are the preparations of Focus Hotel to its WSE initial offering? Did you select the brokerage that will help with the preparations already? Is Q4 2018 a practicable/valid deadline?

Formally, we should be ready by Q4 this year. The rest depends on the market situation and the interest in our offer.[/box]

Mister President, is the situation with Getback company a sort of a road sign to you, an example of how a company and its investor relations should not be managed, or do you cut off from this subject entirely?

We adopt a long-term perspective on investments and investor relations. We want to generate satisfying return rates for our shareholders year to year. We focus on the generated cash, not on ledger entries. In this perspective of ours we differ from this sort of companies entirely. We believe that it pays back in the long term.[/box]

Is there something that you envy the Arłamowo center? Would your subsidiary company - Focus - be capable of handling such a level of investment?

Focus Hotels focuses on business-oriented hotels in city centers. From this we do know how to earn money. We do not have this type of investment plans.[/box]

What book would you recommend to every entrepreneur? If we may ask, how do you invest your private funds - estate, stocks?

The best book for every entrepreneur is the Bible. From it you may learn everything on the behavior of man, which is immensely helpful in investing. As a private person I invest both in real estate as well as stocks.[/box]

When will the visualizations of the Krzysztof Łukanowski’s project be unveiled - i.e. the project of building a housing estate in Fordon, at Studencka and Strzeleckiego streets, at the grounds of Projprzem?

When will the first Immobile K3 tenants be disclosed, and is the actual demand on the office market so weak these days that it is difficult to develop this segment in Bydgoszcz?

Platanowy Park, Fordon... and what else? Does the group have any long-term plans concerning investing in Bydgoszcz?

Will - following the footsteps of other developers, such as KWK or Moderator - CDI try to open more to persons interested in the investment subject - by way of i.e. open door, improved contact with the media/marketing people?

When are the works at the Hotel Pod Orłem launching?

The Fordon design will be published in the second half of June.

We already have concluded contracts for the office project IMMOBILE K3, e.g. with an insurance company, a bank and a financial institution. Talks are being conducted with other companies too. The building's location and the market situation is good enough to make us rest assured that the space at our building will indeed be rented.

We already have launched two residential investment projects in Bydgoszcz, and are planning a third.[/box]

Mister President, how do you find the initial draft of the Reits Act, focusing only on the residential projects?

Do you believe it to be an optimum project, or do you believe that Reits should also be defined as any types of real estate, like in the USA, causing investors to operate a full range of companies generating large dividends?

We believe that the Reits should entail a wide range of real estate types.[/box]

We don't like politics :). The situation at the Group is dynamic, and we don't want to incur any long-term liabilities. This is not to say that we are not assuming the attaining of profits and paying dividends in the future.[/box]

Would you like to have more institutions in the shareholding structure?

We are far from designing a shareholding structure. We believe in the open market.[/box]

Referring to the hotel segment - was the effect of the more and more popular phenomenon of short-term rental of apartments in city centers via services such as Airbnb or Booking negatively reflected in the margins or revenues of the company? This is also an important matter for the future, since part of the developers build entire blocks intended for this type of investments.

The offers of Airbnb portal are targeted at a different group of customers (families, students). We do not lose on margin because we are oriented on the business customer. We are for an open market, provided that the tax conditions are uniform.[/box]

What is the present value of the portfolio of orders for Modulo parkings? When are you expecting to receive the first orders from Germany?

To this day we have received an order for over 1000 parking places. The sale in Germany already took place.[/box]

What must a company have to make you interested in acquiring it? Which sectors do you consider - is it the industry only?

We are interested in the sectors in which we operate. A company must offer an attractive price, and we have to have a plan for it.[/box]

How is the implementation of the strategy announced last year going? Do you observe any positives in the Q1 results already? Did anything surprise you positively or negatively by now? Please comment shortly

We were positively surprised. All the segments are developing faster than we assumed they would.

The implementation of the strategy can be seen in the report for Q1: the hotel segment grew 34%, the industry, including industrial buildings, grew nearly 47%; in the housing development segment revenues increased nearly 4.5-fold.[/box]

Were there any specific macro or political risks this year concerning your business?

The political and macro risks are significant for every company. We do not see any changes in the recent period in this regard.[/box]

Do you intend to rethink your plans concerning the office buildings at Platanowy Park after the probably slightly weaker-than-planned interest in Immobile K3' office space?

We believe in the office market in Bydgoszcz and are not changing our plans.[/box]

What is the status of the PROJPRZEM - MAKRUM merger? Were the heaviest restructing costs already borne by the company, and may we now expect a generally positive impact of this segment on the group's results, or will we have to wait some more?

The positive impact can be observed already in the results for the previous year and the first quarter.[/box]

In the strategy you are assuming the doubling of income within a period of three years, and then further growth. Can you say after this quarter that the perspective of PLN 475 million by year 2020 is realistic, and which factors point out to its “proving”?

We are satisfied with the results for the first quarter, and we do not see any threats to the implementation of the strategy so far.[/box]

How is the reorganization of the group activity's structure going, and do you consider a possibility of listing any of the subsidiary companies on the exchange?

The reorganization is proceeding in line with the assumed strategy. We are not giving up the plan of offering a hotel and housing development company on WSE.[/box]

To which WSE-listed company (in terms of the business model) may Focus Hotels be compared?

How did you manage to maintain the overheads in Q1 at the level of Q1 of the preceding year, and - at the same time - to increase the scale of business?

The quantitative and valuable development of our business does not require increasing the overhead costs.[/box]

What is this year's plan for the developer segment, and do you count on equally high growth as in the first quarter?

The recently acquired company Projprzem has been improving its results quarter to quarter. Will the subsequent quarters be also good?

The growth is a consequence of the work of the entire team at PROJPRZEM MAKRUM company. We are expecting good results in the quarters to come.[/box]

Should we expect the opening of new hotels - if so, when?

The acquisitions team at Focus Hotels has been working efficiently. We will be informing on its successes in the communications. The nearest opening will come in Poznań in August, and another openings are planned in Lublin and Warsaw.[/box]

Are you planning another large acquisition?

We are working at it unceasingly. Please be patient - acquisitions are to be made, not to be talked about.[/box]

What is your opinion of the critique expressed by Councilor Stefan Pastuszewski in the mass media?

Electoral campaigns have their rules. Except for voting in the elections, we do not intend to take part in it.[/box]

What was your role in the project of cutting out the chestnut trees at Kościeleckich Square?

We learned on this scandalous project from the press. One of the architectonic ideas of our design was the greenery of Kościeleckich Square majestically reflecting from the facade of our building.[/box]

How is the sale at Platanowy Park going?

Products of total value PLN 35 million were sold till this day, which amounts to 67% of the expected income. More details were included in the recently published statement: http://www.immobile.com.pl/pl/relacje-inwestorskie/raporty/2018/okresowe-12 [/box]

How is the development of parkings going on?

Is it true that you voted for increasing the dividend at PJP at the motion of a minority shareholder?

The shareholder's argumentation was convincing, and we consented to this motion owing to the company’s positive standing.[/box]

You sold the plant at Sępólno, and the income from the industry increased. How is it possible?

what is going on with the investment at Fordon?

Like I said, it is in preparation; this year we are commencing the construction.[/box]

Will the hotel at Bernardyńska street at Bydgoszcz be located in the former office building of Projprzem?

How do you find the minimum hourly rate passed by the parliament - did labor costs increase at your companies significantly; if yes, could you please specify a percentage value?

A relatively small number of persons earned the lowest salary at our company, so its growth was not reflected significantly in the remuneration costs. We are observing an increase in the prices of service providers working with our companies.[/box]

Do your companies have trade unions? If yes, then what does the co-operation with them look like - is there a chance for a selected employee being appointed to the supervisory or management board?

We do not have any trade unions as for now.[/box]

Do you see potential in ZREMB company with which talks were conducted regarding subsidization? Why was that issue suspended?

Like we informed in the communication, the issue was terminated - we did not manage to reach an understanding with the management of Zremb company.[/box]

What is the present status of settling the transaction of migrating Makrum to Projprzem. How much did Projprzem pay to GKI already, and when are further settlements to be expected?

The transaction was settled in a major part already. The amount remaining to be paid is below

Thank you for participation in the chat and for actively asking questions. We invite anyone who did not have an opportunity to participate in the chat to contact our company directly, to follow us on FB, Twitter, and to sign up for our Newsletter. 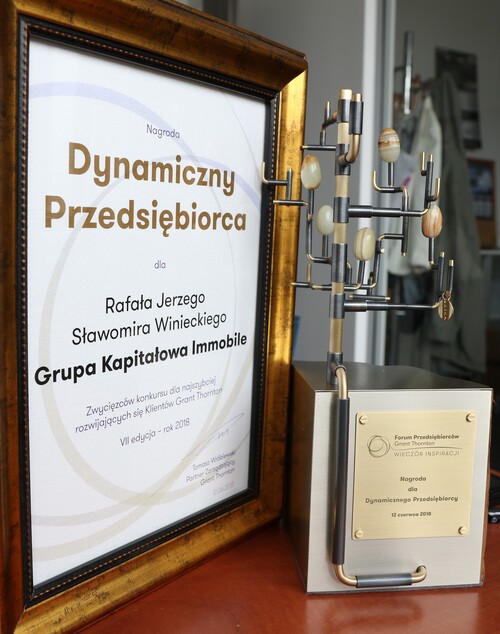 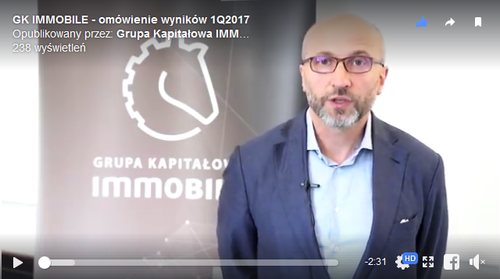