Works on the investment by Bernardyńska Street in Bydgoszcz
Data publikacji: 17.09.2019

Demolition works are underway on the latest investment of the developer segment of Grupa Kapitałowa IMMOBILE. It is reconstruction of the former office building into a modern hotel. We present photographic documentation of works by Krystian Dobosz from the blog 'Bydgoszcz w Budowie'.

A three-star hotel would be located in a revitalized building at Bernardyńska 13, which previously served as the 10-story office building. The characteristic blue office building of Projprzem for 55 years of its existence has grown into the panorama of Bydgoszcz and the awareness of its residents. The building was erected according to the design of Witold Jańczak in 1964. From its inception, it housed the headquarters of Projprzem Makrum. In mid-December 2018, this company informed about the sale of real estate to a subsidiary of the IMMOBILE Group – Hotel 1 Sp. z o.o., which acts as an investor. Its plans assume a drastic change in the external appearance of the building. The façade installed several years ago is slowly disassembled. It will be replaced by a new, mostly glass facade.

The great advantages of the future hotel will certainly be beautiful views of the old city and the vast panorama of Bydgoszcz, especially from the top floors of the object and the location on the charming banks of the Brda River. The proximity of the old market, most of the city's attractions and one of the main transport hubs make it an ideal location for both tourists and business guests.

The contract engineer in this investment will be the leader of the Group’s development segment – CDI Konsultanci Budowlani. Piotr Bartkowiak from the Architektonika studio from Bydgoszcz is the author of the reconstruction project. The plans assume completion of construction works in about a year.

The first major works at Bernardyńska Street began in July with emptying the rooms from the remains of previous tenants. This part of the task continues to this day. On the ground floor you can still find a reception, and on the top floors a carpet that resists breaking up.

Not much later, the first scaffolding was erected around the building, which should cover the entire building until next week. At the same time, the crew inside began to demolish unnecessary walls. Works are also underway to erect new walls and wall up unnecessary window and door openings. Work on dismantling the decades-old elevator is expected to start soon. 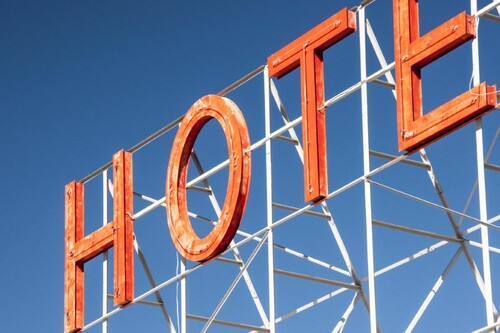