Grupa Kapitałowa IMMOBILE with significant growth in all segments in 1H2018
Data publikacji: 17.09.2018

Grupa Kapitałowa IMMOBILE S.A., listed on the Warsaw Stock Exchange since 2007, has published its financial results for the first half of this year. Operating revenues in all operating segments of the company - development, hotel and industry - increased significantly as compared to the first half of 2017.

Consolidated revenues of Grupa Kapitałowa IMMOBILE in the reporting period amounted to PLN 168 million, increasing by nearly 50% compared to the same period last year. The operating result increased by 258% to PLN 14.1 million and the net profit sky-rocketed to PLN 4.5 million. The value of assets and equity increased in the company, while long-term debt decreased by 14%. EBITDA for the first half of the year increased sharply - to PLN 18 million from PLN 8.5 million in the first half of 2017.

“We are moving ahead from a very successful six-month period, confirming the validity of the adopted development strategy. The Company recorded an increase in revenues in each of the three main operating segments,” comments the President of the Management Board of GK IMMOBILE, Rafał Jerzy.

A rapid increase to the level of PLN 30.2 million was recorded in the real estate development segment. The nearly 5-fold increase in revenue is attributable to the carrying out of the largest construction project in Bydgoszcz - the Platanowy Park, under which 1,250 flats will be built. In H1, a significant part of sales of the 'I' stage of this project was recorded. The next phase of the project is currently at the construction and marketing stage. The Company is also preparing to launch another housing project, the University Housing Estate in Fordon, Bydgoszcz, which will consist of 600 flats.

“The two very large projects give us a dominant position among the local real estate developers. We are carrying out the construction works on proprietary, large plots of land, and their division into stages provides the Group's real estate sector with a stable perspective of income in the coming years and flexibility with respect to the market demand. We are already considering new projects, also in other cities,” reveals President Jerzy.

Revenues in the hotel sector increased by 22.5% to 23.5 million, driven by the first three months of operation of the new facility in Sopot. The ninth hotel in the chain, with an excellent location and Premium standard, opened in early April. Currently, the Focus Hotels company operating within Grupa IMMOBILE is preparing to open the 10th offering of the chain in Poznań in October. The next ones in the launch schedule are hotels in Lublin (2019) and Warsaw (2020). At the same time, the company is conducting advanced negotiations on further locations.

Revenues in industry and industrial construction increased by 37.44% to 108.2 million, representing 64.4% of the Group's total revenues. The good condition of this business has been shown by the already disclosed results of the main industrial company operating in its structures - PROJPRZEM MAKRUM S.A. The company is steadily improving its results, and the price of its shares between the publication date of the half-yearly reports in 2017 and 2018 increased by as much as 67.5%.

Following the publication of good semi-annual results, both companies will pay dividends. PROJPRZEM MAKRUM shared its profit with the Shareholders on September 12th. At Grupa Kapitałowa IMMOBILE, the payment will be made on 21 September. It will already be the third dividend in this company. 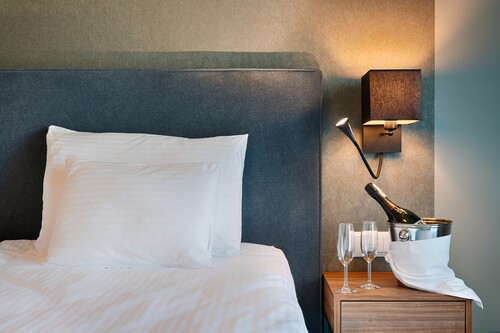 Preparations for the opening of the Focus Poznań Hotel